The Virgin of Flames

“Chris Abani reveals Los Angeles as we have never seen it before - magical and crumbling, a place of deserted rooftop oases and intersections where new identities are bought and sold. He has rewritten our American story and brought the world into our streets, our most private negotiations and confessions.” 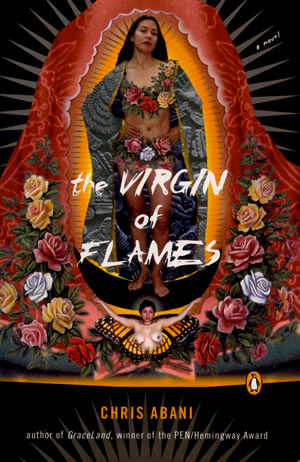 Nominated for The Lambda Prize

From the author of the award-winning GraceLand comes a searing, dazzlingly written novel of a tarnished City of Angels

Praised as “singular” (The Philadelphia Inquirer) and “extraordinary” (The New York Times Book Review), GraceLand stunned critics and instantly established Chris Abani as an exciting new voice in fiction. In his second novel, set against the uncompromising landscape of East L.A., Abani follows a struggling artist named Black, whose life and friendships reveal a world far removed from the mainstream. Through Black’s journey of self- discovery, Abani raises essential questions about poverty, religion, and ethnicity in America today. The Virgin of Flames, a marvelous and gritty novel filled with indelible images and unforgettable characters, confirms Chris Abani as an immensely talented writer.

“A powerful, scary and beautiful novel. Abani is a force to be reckoned with, a world-class novelist and poet.”

“Chris Abani is a force of nature. In the world of letters he is a luminous shattering talent, and The Virgin of Flames is his strangest and wildest trip yet. I don’t think there’s ever been a protagonist quite like Black, or an LA quite like this one.”

“…you are bound to find yourself moved and entertained by an iridescent novel from a writer who has come through Lagos and London to take his place as one of our newest, and most gifted, native sons.”

“Ambitious and original, Abani’s Los Angeles is at turns desolate and luminous…a place that is horrifying and tender and absurd in equal measure”

“Abani has established himself as an unflinching advocate for individuals exiled to society’s underside…Redolent of the hunger and doom of Nathanael West, lush and surreal as L.A.’s street murals, and combustible with denied eroticism and thwarted spirituality, Abani’s feverish portrait of a haunted artist embodies post-9/11 anxiety and the longing for peace.”

“Our guide through this westernmost circle of the American hell… What is most arresting …isn’t the grotesqueness Abani observes…but the pathos he unfailingly finds alongside it like a jewel in the muck.”

“With its complex characters and exquisitely imagined cityscapes, The Virgin of Flames is the work of a top-notch writer.”

“Abani is a muscular, lyrical stylist, [who]has crafted a cleareyed and compassionate portrait of an urban underclass.”

“Abani touches on the far reaches of psychic pain, religious and sexual, and creates a hallucinatory despair.”

“In a novel full of such dazzlingly apt images, Abani shows that the coming-to-America narrative, far from being played out, may be just beginning, and that it’s by no means limited to those who’ve just arrived.”

“A bleak, searing and sad portrait of outcasts.”

“[Abani] has artfully exposed Los Angeles’ heart of darkness in The Virgin of Flames… With a command of Los Angeles’ underbelly reminiscent of Walter Mosley at his most striking, Abani spirits his angst-ridden artist toward a breathtakingly unexpected, if perhaps inescapable, conclusion.”

“…full of passages of lyrical beauty that render the cultural melange of modern-day Los Angeles with openhearted grace.”