“Like the protagonists {of} Flaubert’s Simple Heart and J. M. Coetzee’s Waiting for the Barbarians, My Luck is both archetypal and utterly himself. Song for Night contains, at once, an extraordinary ferocity and a vulnerable beauty all its own.” 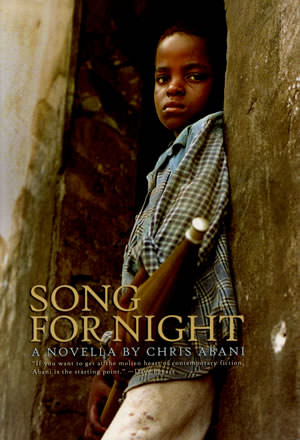 Part Inferno, part Paradise Lost, and part Sunjiata epic, Song for Night is the story of a West African boy soldier’s lyrical, terrifying, yet beautiful journey through the nightmare landscape of a brutal war in search of his lost platoon. The reader is led by the voiceless protagonist who, as part of a land mine-clearing platoon, had his vocal chords cut, a move to keep these children from screaming when blown up, and thereby distracting the other minesweepers. The book is written in a ghostly voice, with each chapter headed by a line of the unique sign language these children invented. This book is unlike anything else ever written about an African war.

Winner of PEN Beyond the Margins Award.

“Song for Night is a devastating portrait of a boy holding onto the shreds of his innocence during a war that deliberately, remorselessly works to yank it away.”

“If you want to get at the molten heart of contemporary fiction, Abani is the starting point.”

“Chris Abani is a writer of mesmerizing powers, embracing warmth, and transcendent compassion.”

“The genius of Abani’s work derives from his intellectual engagement with our world and his unflinching depictions, in the most mesmerizing language imaginable, of its most insidious horrors and its richest beauties. Song for Night demonstrates, yet again, why Abani ranks among our most incendiary and emotionally devastating and important writers.”