The Secret History of Las Vegas

Suspenseful through the last page, The Secret History of Las Vegas is Chris Abani’s most accomplished work to date, with his trademark visionary prose and a striking compassion for the inner lives of outsiders.

“Abani’s latest is not an ordinary crime novel…everyone is fucked.” 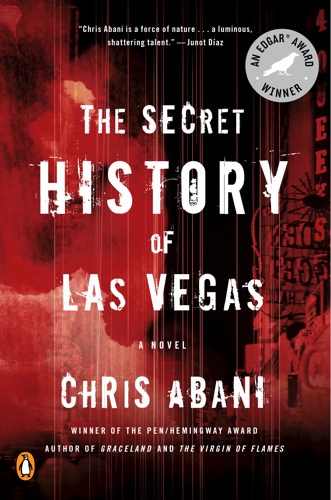 Before he can retire, Las Vegas detective Salazar is determined to solve a recent spate of murders. When he encounters a pair of conjoined twins with a container of blood near their car, he’s sure he has apprehended the killers, and enlists the help of Dr. Sunil Singh, a South African transplant who specializes in the study of psychopaths. As Sunil tries to crack the twins, the implications of his research grow darker. Haunted by his betrayal of loved ones back home during apartheid, he seeks solace in the love of Asia, a prostitute with hopes of escaping that life. But Sunil’s own troubled past is fast on his heels in the form of a would-be assassin.

“Brisk and funny in ways the genre demands… The Secret History of Las Vegas brings an admirably global perspective to the crime novel.”

“Conjoined twins Fire and Water are Abani’s most indelible creation”

“What lifts the novel is its energy, the audacity of Abani’s imagination, and most of all the breadth of vision that supplies its moral context. The Secret History of Las Vegas has a global sweep and - what’s often aspired to, but rarely achieved in a novel - a feeling of thematic unity.”

“part of the pleasure of the novel is the view into the strange history of Las Vegas… Abani adds many sides to the story he tells so unforgettably, giving voices to otherwise voiceless victims… The question may not be whether this beautiful, ruthless novel will come true but rather, Has it already come true? And if so, what should we do?”

“The Secret History of Las Vegas is an intricate braid of story strands, enriched by vivid descriptions, intriguingly dysfunctional characters, and abundant metaphors. Expect the unexpected.”

“Chris Abani might be the most courageous writer working right now. There is no subject matter he finds daunting, no challenge he fears. Aside from that, he’s stunningly prolific and writes like an angel. If you want to get at the molten heart of contemporary fiction, Abani is the starting point.”

— Dave Eggers, author of The Circle

“Abani creates vivid metaphors not just with his characters, but also with a drowned town emerging from the waters of Lake Mead, a ghost town that hosts the Carnival of Lost Souls, and the city of Las Vegas, which celebrates the dark, the hidden and the grotesque.”

“Lambent prose lifts this offbeat crime novel from PEN/Hemingway Award-winner Abani (The Virgin of Flames), who effortlessly captures the essence of Sin City”