“Abani is a fiction writer of mature and bounteous gifts…Becoming Abigail is more compressed and interior [than graceland], a poetic treatment of terror and loneliness…its sharp focus on the devastation of one young woman, has a deeper kind of resonance…Abani, himself incarcerated and tortured for his writings and activism in Nigeria in the mid-’80s, writes about the body’s capacity for both ecstasy and pain with an honesty and precision rarely encountered in recent fiction…This is a powerful, harrowing work, made more so because, while much of the narrative seems to be a vortex of affliction, Abigail’s destiny is not inevitable. The small canvas suits Chris Abani.” 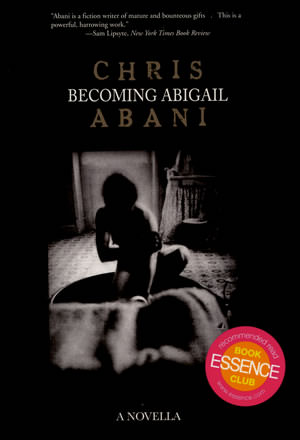 Tough, spirited and fiercely independent Abigail is brought as a teenager to London from Nigeria by relatives who attempt to force her into prostitution. She flees and in the aftermath struggles to find herself in the shadow of a strong but dead mother and also the means to save the one lover she has chosen in her short life, her social worker; disgraced and now facing charges. In spare yet haunting and lyrical prose reminiscent of Marguerite Duras, Abani brings to life a young woman who lives with a strength and inner light that will enlighten and uplift the reader.

2007 – Finalist for the PEN Beyond The Margins Award.

2006 – A selection of the Essence Magazine Book Club

2006 – A selection of the Black Expressions Book Club

“Moody, lyrical prose reminiscent of Toni Morrison’s Beloved…Though the fictional Abigail exists only on the pages of Abani’s novella, her character will seize the imagination of everyone who reads her story.”

“Becoming Abigail, a spare yet voluptuous tale about a young Nigerian girl’s escape from prostitution is so hypnotic that it begs to be read in one sitting…Abigail is sensitive, courageous, and teetering on the brink of madness. Effortlessly gliding between past and present, Chris Abani spins a timeless story of misfortune and triumph.”

“A darkly poetic investigation into the past’s deceptive hold over the present…Abani writes in dense, gorgeous prose. Abigail is not a creature of pity but inspiration.”

“Abani finds his place in a long line of literary refugees, from the Mexican revolutionary Ricardo Flores Magon to Bertolt Brecht and Theodor Adorno…Becoming Abigail is, not surprisingly, about memory, loss, and all the cruel disjunctions of exile. Not for a moment, though, does Abani allow himself that most tempting stupefacient of exile, nostalgia. Abani’s prose is diaphanous and poetic. His lyricism is elliptical, almost evasive…Becoming Abigail is a hard, unsparing book, cruel in its beauty, shocking in its compassion.”

“A lyrical yet devastating account of a young woman’s relocation to London from Nigeria…Abani’s abundant talent is clearly evident throughout, as is his willingness to be brutally honest without being grotesque. He also refrains from polemics and focuses solely on the artistic presentation of a young, tragic life, leaving interpretation to the reader.”

“A searing girl’s coming-of-age novella in which a troubled Nigerian teen is threatened with becoming human trade…Recalling Lucas Moodyson’s crushing Lilya4Ever, this portrait of a brutalized girl given no control over her life or body, features Abani’s lyrical prose and deft moves between short chapters.”

“Spare, haunting vignettes of exquisite delicacy…Never sensationalized, the continual revelations are more shocking for being quietly told, compressed into taut moments that reveal secrets of cruelty—and of love—up to the last page. Abani tells a strong young woman’s story with graphic empathy.”

“Becoming Abigail has the elegance and lyricism of a prose poem but doesn’t soft-pedal the abuse it chronicles.”

“Abani writes in a fearless prose…He is able to toe that line between restraint and abundance, unfolding Abigail’s history like the raising of a bandage.”

“Compelling and gorgeously written, this is a coming-of-age novella like no other. Chris Abani explores the depths of loss and exploitation with what can only be described as a knowing tenderness. An extraordinary, necessary book.”

“Becoming Abigail, in quick bright sentences and chapters, addresses head-on many of the darker sides of human character, yet Abani’s voice brings perspective to every moment, turning the pain into a beautiful painterly meditation on loss and aloneness.”

— Aimee Bender, author of The Girl in the Flammable Skirt

“Becoming Abigail is an intimate - and ultimately devastating portrait of grief and pain. Abani’s empathy for Abigail’s torn life is matched only by his honesty in portraying it. Nothing at all is held back. A harrowing piece of work.”