“…one of the most astonishing metropolitan novels of our time!” 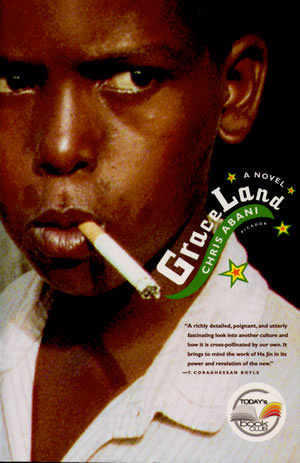 The sprawling, swampy, cacophonous city of Lagos, Nigeria, provides the backdrop to the story of Elvis, a teenage Elvis impersonator hoping to make his way out of the ghetto. Broke, beset by floods, and beatings by his alcoholic father, and with no job opportunities in sight, Elvis is tempted by a life of crime. Thus begins his odyssey into the dangerous underworld of Lagos, guided by his friend Redemption and accompanied by a restless hybrid of voices including The King of Beggars, Sunday, Innocent and Comfort. Young Elvis, drenched in reggae and jazz, and besotted with American film heroes and images, must find his way to a GraceLand of his own. Nuanced, lyrical, and pitch perfect, Abani has created a remarkable story of a son and his father, and an examination of postcolonial Nigeria where the trappings of American culture reign supreme.

“Extraordinary…This book works brilliantly in two ways. As a convincing and unpatronizing record of life in a poor Nigerian slum, and as a frighteningly honest insight into a world skewed by casual violence, it’s wonderful…And for all the horrors, there are sweet scenes in graceland too, and they’re a thousand times better for being entirely unsentimental…Lovely.”

“graceland amply demonstrates that Abani has the energy, ambition and compassion to create a novel that delineates and illuminates a complicated, dynamic, deeply fractured society.”

“A wonderfully vivid evocation of a youth coming of age in a country unmoored from its old virtues…As for the talented Chris Abani…his imaginary Elvis is easily as memorable as the original.”

“graceland teems with incident, from the seedy crime dens of Maroko to the family melodramas of the Oke clan. But throughout the novel’s action, Abani-an accomplished poet who published his own first novel at Elvis’s tender age of 16-keeps the reader’s gaze fixed firmly on the detailed and contradictory cast of everyday Nigerian life. Energetic and moving…Abani [is] a fluid, closely observant writer.”

“A wonderfully vivid evocation of a youth coming of age in a country unmoored from its old virtues….As for the talented Abani, Nigeria’s loss is America’s gain. His imaginary Elvis is easily as memorable as the original.”

“Abani… has written an exhilarating novel, all the more astonishing for its hard-won grace and, yes, redemption.”

“It is to be hoped that Mr. Abani’s fine book finds its proper place in the world…[Abani’s] perception of the world is beyond or outside the common categories of contemporary fiction and he is able to describe what he perceives compellingly and effectively…The novel is a reflection of the chaos that reigned in Nigeria…on the broader tension between tradition and Western culture in postcolonial societies [and] on the trials a boy must face to become a man. ..[Abani captures] the awful, mysterious refusal of life’s discrete pieces to fit”

“An intensely vivid portrait of Nigeria that switches deftly between rural and urban life.”

“Singular…Abani has created a charming and complex character, at once pragmatic and philosophical about his lot in life…Observes the chaotic tapestry of life in postcolonial Africa with the unjudging eye of a naive boy.”

“The imagery of the book is tremendous…a mesmerizing glimpse at a polarized society with an unbelievable ability to function…Abani’s debut is spectacular, and may be just the spark today’s Nigeria needs to undergo its own revival in stability, progress and culture.”

— The Univ of Wisconsin Daily Cardinal

“[Abani’s novel is] deeply concerned with how Western colonialism transformed Africa in ways both major and minor…Abani masterfully gives us a young man who is simultaneously brave, heartless, bright, foolish, lustful, and sadly resigned to fate. In short, a perfectly drawn adolescent…Abani’s ear for dialogue and eye for observation lend a lyrical air…In depicting how deeply external politics can affect internal thinking, graceland announces itself as a worthy heir to Chinua Achebe’s Things Fall Apart. Like that classic of Nigerian literature, it gives a multifaceted, human face to a culture struggling to find its own identity while living with somebody else’s.”

“The next wave…of Nigerian literature.”

“Beautifully written, perceptive and painful…A serious and poignant novel about the problems in the postcolonial era in Nigeria.”

“graceland is an invaluable document.”

“Remarkable….Chris Abani’s striking new novel, graceland, wins the reader with its concept-an Elvis impersonator in Nigeria-and keeps him with strong storytelling and characterization…. graceland marks the debut of a writer with something important to say.”

“The novel is not just a politically charged coming of age story, but a tale of an entire nation’s loss of innocence represented in the life of one boy. And it is this thematic largesse and the stylistic demands to which Abani rises that puts graceland in the league of novels like Czeslaw Milosz’s The Issa Valley, Oe and even Marquez, each of which tries to describe the loss of an old world in the face of a new one…graceland is an overwhelming novel, and may well count as a major work of literature.”

“graceland paints an often horrific and sometimes profound portrait….Though a work of fiction, graceland also serves as a history far more powerful and fantastic than any official account of Nigeria’s teetering progress toward democracy.”

“The book’s juxtaposition between innocence and bleak survival is heart-rending….Sharp, graphic, and impossible to dismiss.”

“Disturbing but hysterically funny, graceland is a poignant work of innocence robbed by endless corrupt and brutal forces.”

“Chris Abani’s graceland is a richly detailed, poignant, and utterly fascinating look into another culture and how it is cross-pollinated by our own. It brings to mind the work of Ha Jin in its power and revelation of the new.”

“To say that this is a Nigerian or African novel is to miss the point. This absolutely beautiful work of fiction is about complex and strained political structures, the irony of the West being a measure of civilization, and the tricky business of being a son. Abani’s language is beautiful and his story is important.”

“graceland is a painful look at an urban culture seemingly always on the verge of complete societal breakdown. Chris Abani’s riveting novel is a superbly written, structurally fascinating work and I found myself captivated by the hilarity of some of the scenes, often as I found myself on the verge of tears. It is a stunning debut by an immensely talented writer.”

— Quincy Troupe, Author of Transcircularity, Miles: The Autobiograpy and Miles and Me

“This is a new kind of book. We will look back on its publication as a watershed moment in the history of postcolonial literature. It is, as the best of such novels are, hybrid, monstrous, exilic, an indictment of the global terrorism of capital, yet it is also something we have not seen before. In Elvis we meet an African man who suffers incandescently, who watches others suffer more, yet emerges not as another tragic masculinity, but as that rarest of creatures, a hero. This is Chris Abani’s gift, to transmute the harrowing into the transcendent. Believe it: Elvis is redemption.”

— Wendy Belcher, Author of Honey From the Lion: An African Journey