“Daphne’s Lot (An Epic) is an event of history, myth, and knowledge in the event of war and the ongoing turbulence of being human. With the language of hard truth lifted by singing Abani speaks what is impossible to speak. His poetry makes a shine in the hellish bogs where it is rare to see shine. Kindness is the measure of these poems. It’s a beautiful and tough poetry.” 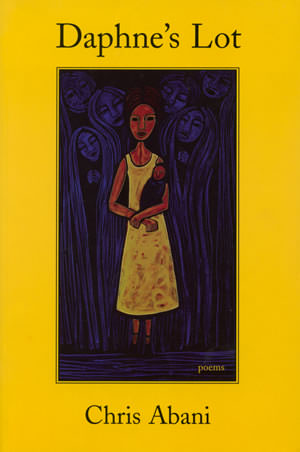 “The masterful wedding of the narrative and the lyric in these poems (whose subject is the maturation of a sensibility, the coming-of-age of a young Englishwoman - the power of her ties to family, husband and her ‘adopted’ country, Nigeria - as well as the illumination of her own soul and that of the narrator’s) fills the reader with both sorrow and wonder. It is an instructive tale for our age - its vision of the individual will and imagination resisting the madness of politics and the destruction of war is singular and profound.” — Carol Muske Dukes

“Daphne’s Lot is an absolute tour de force! The title poem is an exceptionally poignant novella in verse, celebrating the courage and determination of the poet’s mother while charting his family’s difficult flight out of Biafra to England. Masterfully conceived and often wrenching in the harsh details of it vignettes, Daphne’s Lot reminds us of poetry’s essential force-and constant triumph-in giving voice to the most trying of human circumstances. Chris Abani’s new collection is a revelation and victory in every way.”

“Chris Abani’s poems remind us of what happens when moral boundaries are obliterated and the sacredness of life becomes a kind of cynical joke. But these poems also remind us of the human capacity for compassion and love in the face of unspeakable cruelty and fiendish conditions. Chris Abani and his poems matter to all.”